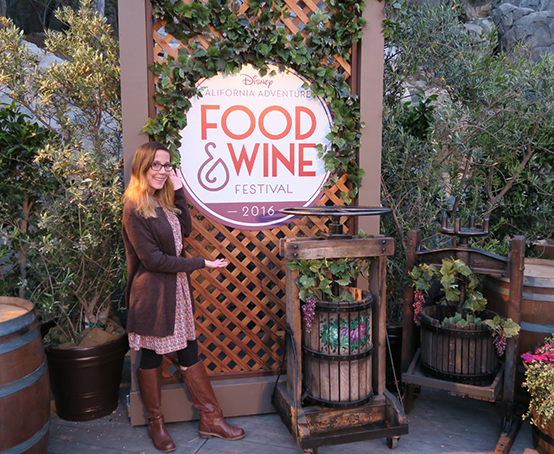 The Disney California Adventure Food & Wine Festival starts today and I'm looking forward to checking it out!  For now, I thought I'd do a throwback post looking back at the festival last year.  I actually wrote most of this after I went in 2016 but for some reason never got around to sharing it- so here it is now! 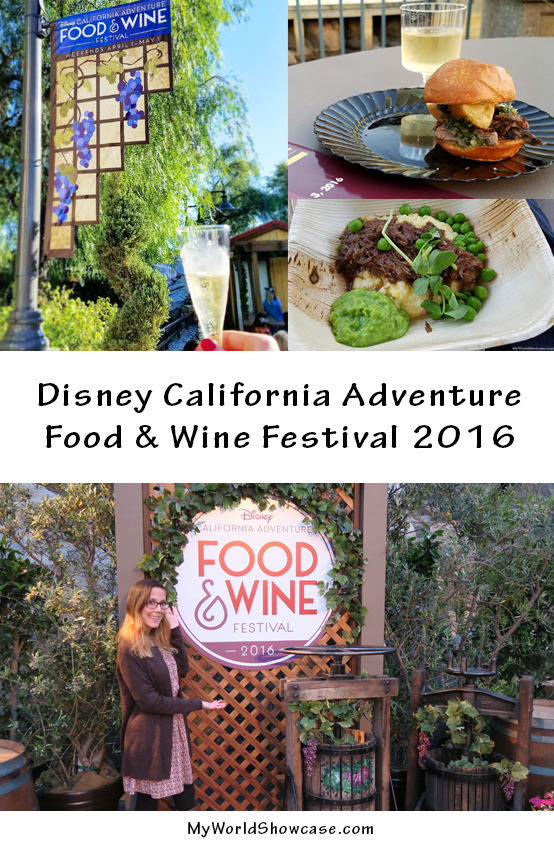 In 2016, the Food and Wine Festival returned to Disney California Adventure.  The last time they had it was in 2010.  Afterwards they started making big changes to the park such as adding Cars Land and Buena Vista Street. Since then I've gone to the Epcot Food and Wine Festival a few times which is a lot of fun so I kept hoping we'd get a festival back at California Adventure.  I was happy when I read it would be returning and couldn't wait to check it out so I went after work with my husband on its first day and then back again several times throughout the month.

The festival in 2016 had 8 kiosks located between Paradise Pier and Buena Vista Street where you could buy different foods and drinks to sample. They had kiosks this time similar to Epcot which I liked.  However, I wished there was a better variety of food and drink offerings. A lot of the items seemed heavy or creamy and there were mostly red wines which all don't sound as appealing on warmer days.  One of the first items we tried was the slider from The Farm kiosk and a glass of wine- unfortunately I can't remember which it was.  The slider was good but I wasn't a fan of the wine. 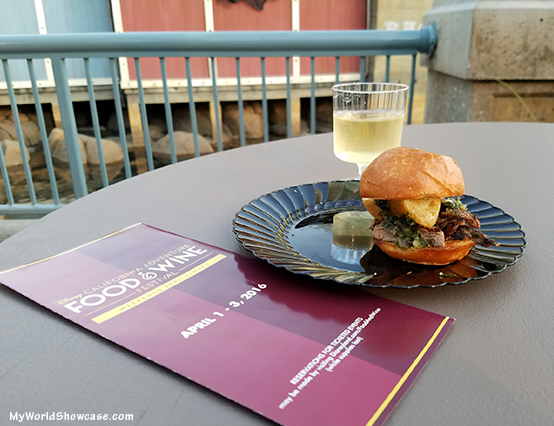 We also tried a Chardonnay flight from the Vineyard stand which we did enjoy. 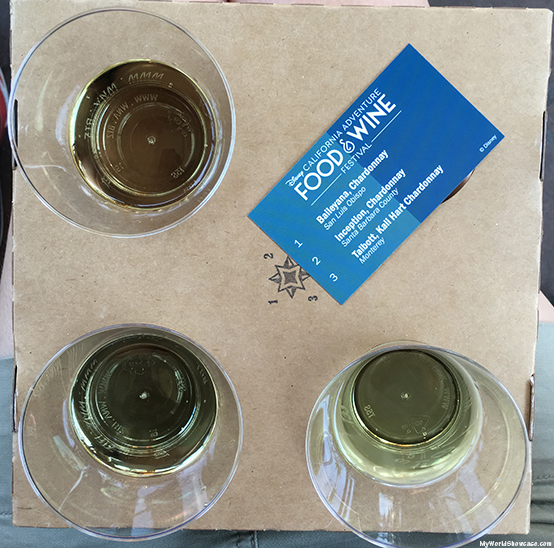 The wagyu beef was our favorite of all the offerings we tried that first weekend.  We did try it again later in the festival however and it wasn't as good.  That is one thing we noticed about the food throughout the festival- the food was inconsistent.  We'd try it one weekend and come back the next and it'd taste or look slightly different.  It was yummy and warm that first time though! 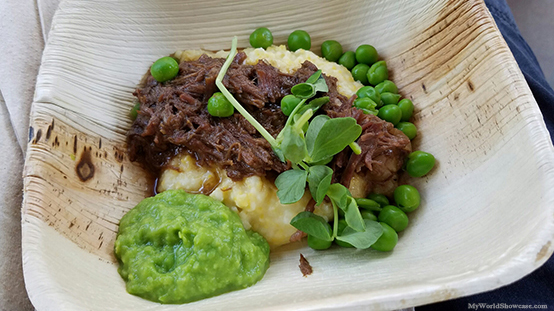 Another thing we had was the Fairy Tale cuvee which is a sparkling wine that you can also find at other places in the park so it actually isn't unique to the festival.  The first time I ever tried it was during the festival in 2010 though so I got a glass because I felt like I needed to make that a tradition.  It's a bit expensive but I had to do it once during the festival!  A nice Photopass Cast Member got this photo of me with it. 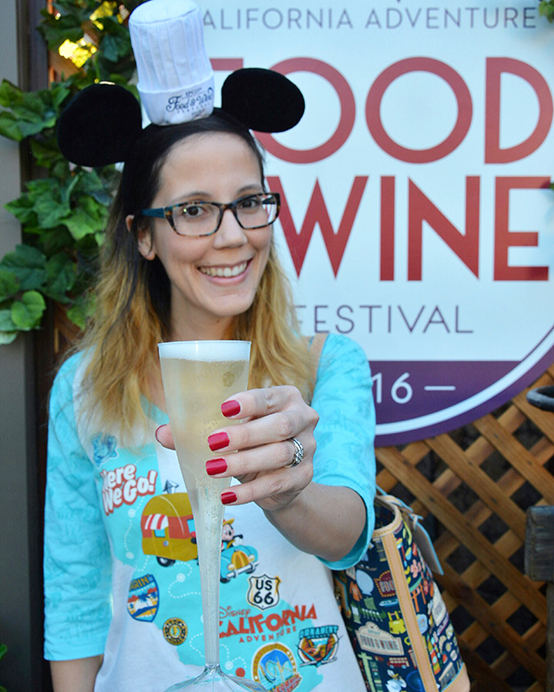 The Blue Sky Cellar was open for Annual Passholders to visit and charge their phones.  They had the old Seasons of the Vine video playing in there which we were happy about and Annual Passholders could also get a free button and recipe card.  There was also a passport that had tabs on it available for APs to purchase that could be used for food at the kiosks but it was a bad deal that didn't really save you any money unless you bought all the most expensive items.

In addition to the kiosks and Blue Sky Cellar, there were a few stages over in HollywoodLand as well as a shop where you could get Food & Wine merchandise.  They were using the old Mad T Party stage for some demonstrations.  It was poorly set up with only 3 or 4 benches you could sit on and they're all in the sun.  I hope that is fixed this year. 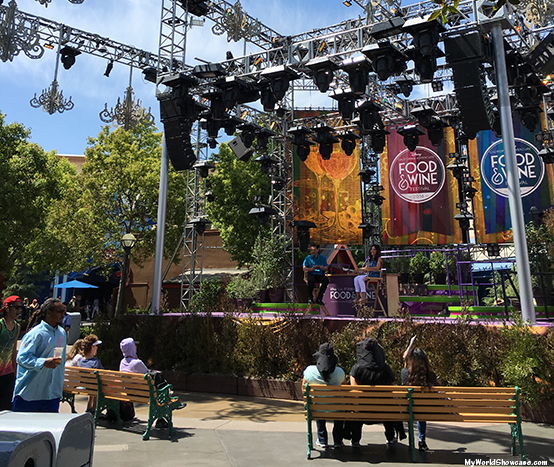 The other stage near there was better with more benches plus they were in the shade.  We didn't get to watch a culinary demonstration but did make use of that space to eat some of the food when other seating areas were too crowded.

For some reason they weren't using Stage 12 like they did in 2010.  I think it's a good space and I'm not sure why they didn't make use of it in 2016. They were using Stage 17 for the celebrity demonstrations but those demonstrations cost $99 so we didn't do any of those.  There were beverage seminars at the Sonoma Terrace and we did the Karl Strauss beer tasting there.  We enjoyed it and had a good time.  I do think they should've had these demonstrations in Stage 12 though to allow for more space.  There were other demonstrations I had been interested in but couldn't do because they were sold out. 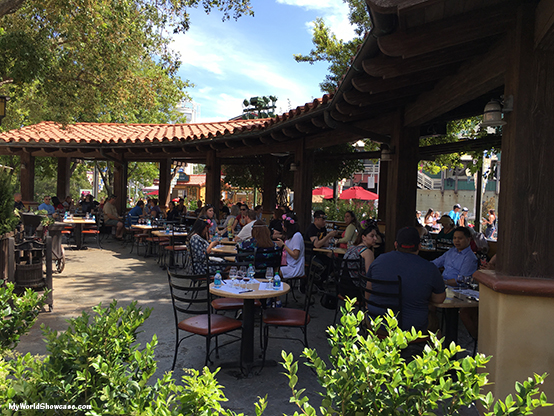 Overall in 2016  I was very happy that the festival was back and enjoyed it but there's still room for improvement. After having seen what Epcot does with their festivals, I felt like DCA could do so much more with their own.  They could offer free passports you get stamped at each kiosk, offer more variety, and make use of all empty available spaces.  I'm really curious to see what is the same and what is different this year and look forward to checking it out this weekend!  I saw photos of some of the merchandise and I think it's really cute.  I'm glad they brought it back again this year and hope they continue to bring the festival back every year and improve it more each time.

Hurray for the first day of the DCA Food and Wine Festival 2017.  Looking forward to checking it out.  Happy wining and dining everyone!