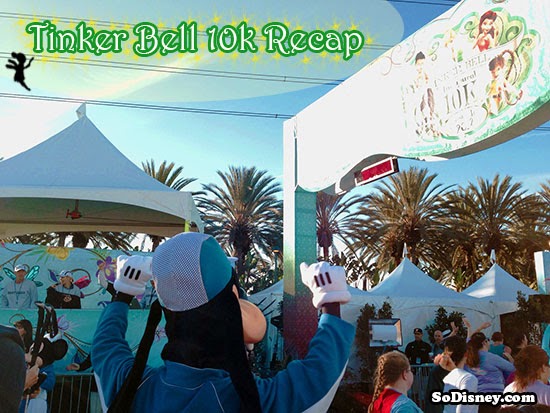 A couple weekends ago I completed the Inaugural Tinkerbell 10k.  On the morning of the 10k, my husband dropped me off at Tiffy's on Katella Avenue.  It was the perfect spot because it was a short distance to the start from there.  I found my friend Mindy and then we walked over together.  We were in Corral D which was near the Paradise Pier Hotel.  It was cold out but I preferred it to the humid weather at the Disneyland 10k last year.  I enjoyed jogging in this weather much better!

At 6AM the race began and Corral A got started.  We slowly made our way to the starting line as each corral went.  Tinkerbell appeared on the big screen there and then finally it was our turn!  This ended up being the only place I ever saw Tinkerbell.  I was a little disappointed that we didn't see any of the fairies along the course except for painted on the mile marker signs.
The start of the course took us by Mickey and Friends Parking Structure.  My husband did the Disneyland 10k with me last year but he sat this one out.  To my surprise, he went to different parts of the course and cheered me on throughout the 10k!  It started with him sending me this picture he took at the parking structure of all the runners.


The start was very slow because of how dense the crowd was.  I'm not a fast runner but it was hard to jog or even walk fast because of the narrow paths we kept taking.  The course took us backstage for a bit and eventually we ended up entering Disneyland by Small World.


I must say I preferred Disneyland 10k's course because it started off with wider roads so runners were able to spread out better.  As you can see in the picture, at almost a mile we were still surrounded by other people. 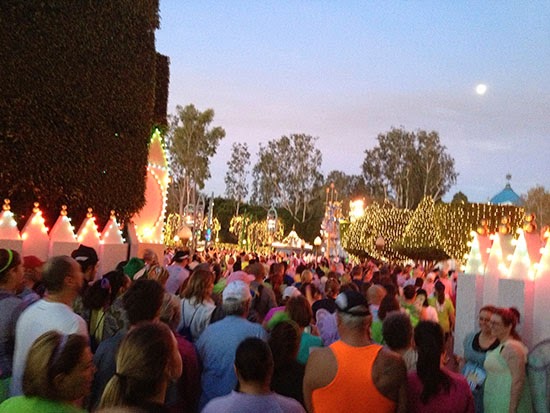 It's a Small World was all lit up so it was fun to jog by! 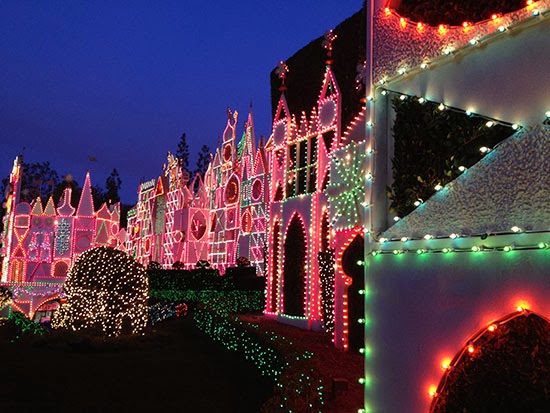 From there we went to Toontown where we entered a backstage area again.


It's always fun to run backstage to me since it's an area I usually don't get to be in.  Before we knew it we were entering Disneyland and running through Critter Country. 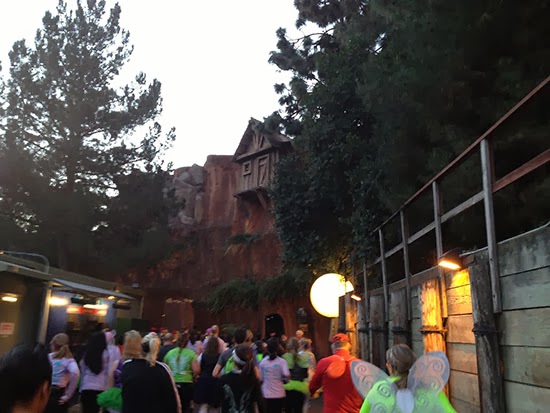 My very favorite thing we saw at this 10k was the bride and tightrope walker from the Haunted Mansion.  I'd never seen them before!  I regret not stopping for a picture but the line was much too long.  If we had gotten in that line, we probably wouldn't have met the required pace.  I did manage to snap this photo though!


From there we continued our run through Disneyland- always so much fun!  We exited out the front gate and we spotted my husband rooting for us there!  He snapped this photo of me and Mindy!  I was dressed like the Blue Fairy and she was dressed like Minnie Mouse!


Next we jogged into Disney California Adventure (DCA) through their front gates.  I thought it was  exciting to run in through the gates without having to wait in a line or show a ticket.  We ran up Buena Vista Street and back towards Paradise Pier.


We ran down Route 66 and then through Bugs Land!


We exited DCA by Tower of Terror.  Again we got slowed down here because of the dense crowd.  I heard later that at around this spot many runners were stopped and carted to the finish line because they didn't make the pace.  I would have been really bummed if that had happened to us.  I think it ended up being beneficial that we didn't make any stops although it's always hard to resist fun photo opportunities. 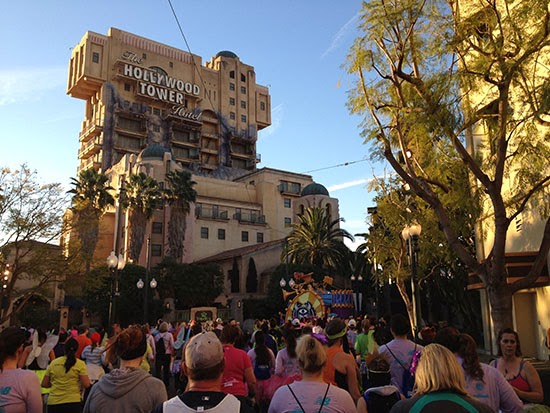 Next we ran through some of the streets outside of Disneyland.  This part of the course was not that exciting but we spotted my husband again twice during this part so that definitely made it better!  He was even holding up a sign that said Go Nerissa!  He knew I had been nervous about this 10k since I didn't feel prepared for it.  It was a sweet gesture that he rooted me on and it meant a lot to me!


Before we knew it we ran by the mile 6 sign and then we crossing the Finish Line!  I high-fived Goofy as I got there and Mindy took this photo of me in my victory pose!


It was a great feeling to cross that Finish Line!  After this we received our medals and met my hubby at Paradise Pier Hotel.


After saying bye to Mindy, we ended up heading into Disneyland to go on the Pinocchio ride since I was dressed like the Blue Fairy.  My running outfit was made by my family and it was so wonderful of them to create it for me!  I had several stressful and busy weeks leading up to this 10k and I feel so lucky to have family that is there for me on when life gets hard.  They all mean the world to me!


The Tinker Bell 10k was another fun experience and I was glad I was able to finish.  Thanks to my pal Mindy for being my jogging partner!  It's always nice to have company on these runs.  Here's a close up pic of my medal! 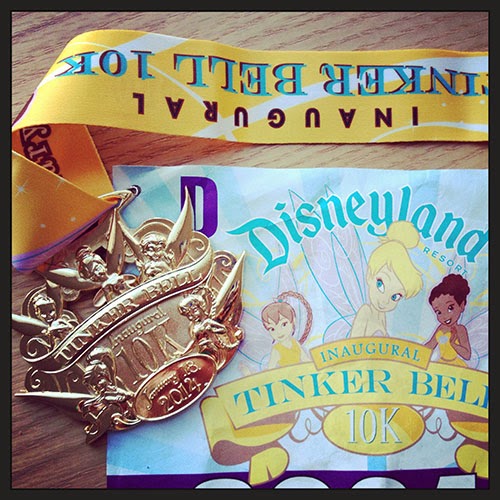 I'm a little sad to report that I won't be doing the Disneyland 10k this year.  The sign up was this week and I was tempted but in the end I pushed myself to skip it this time around.  The runDisney events are a lot of fun but they are expensive and I really need to save the money plus I'm not sure what my schedule will be like.  To cheer myself up though I think I will use some of the money I saved to do a couple 5ks that I haven't done before!
I'm really happy that I have been able to do both the Inaugural Tinkerbell 10k and Inaugural Disneyland 10k.  It's not something I ever imagined I would do and I'm truly happy I did them!

This post was originally posted on my blog So Disney.
Posted by Nerissa