Once Upon A Time's Tron References


I haven’t written about the Once Upon a Time series before but the last few episodes have been a lot of fun to watch and I couldn't resist!  I watch it every week with my husband and one of my sisters watches it too!  We usually text back and forth about it after we've seen a new episode.  Do we have any Once Upon a Time fans out there? I don’t plan to give any big spoilers but did you catch the references to Tron in this week’s episode?  Awesomeness!

Once Upon a Time was created by Edward Kitsis and Adam Horowitz who were also the creators of Lost and writers of Tron: Legacy.  There have been references to Tron before like when you spot Henry playing the game Space Paranoids but this week’s episode’s references were a lot less subtle!

In the episode we have an 80s flashback where we meet the Flynns- a father and son who had recently lost his mother.  Sound familiar?  When we find out the father is named Kurt Flynn I found myself repeating the name out loud. Sounds a lot like Kevin Flynn!  The character also seemed a lot like Kevin Flynn from Tron in how he lost his wife and was close to his son!  I could go on with the similarities in the two characters but I don’t want to spoil the episode for anyone who hasn't watched it yet.  But let’s just say as a huge Tron fan I really enjoyed the similarities!

Then later on in the episode we see this bench with a very interesting looking ad on it! 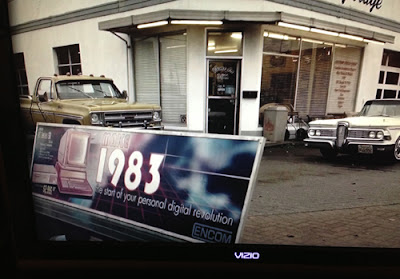 It was pretty exciting to see an ENCOM ad during the part of the episode that takes place in the 80s advertising Kevin Flynn’s digital revolution!

My hubby and I are big Tron fans so of course we really enjoyed this episode!  The actual story in the episode was good too!

If you don’t watch Once Upon a Time it's not too late to start!  The first season is on Netflix so if you are looking for something new to watch I recommend it!

Also if you’re already a big fan like me then check out this Tumblr page for some fun Once Upon a Time photo goodness!

Email ThisBlogThis!Share to TwitterShare to FacebookShare to Pinterest
Labels: Once Upon A Time, Tron, TV