Trader Sam's at the Disneyland Hotel

Today after work I headed over to the Disneyland Hotel to check out the new restaurant and bar that just opened.  I was pretty excited because Disneyland Hotel used to be the place where you could find my favorite bar and hang out- The Lost Bar.  I loved this place and was pretty sad when it closed as part of the Disneyland Hotel renovations.  After the Lost Bar closed Disney announced that Trader Sam's was going to be built in it's place along with Tangaroa Terrace (replacing Hook's Point).  It sounded pretty cool when I read about it so I started to look forward to it's opening which leads us to today! 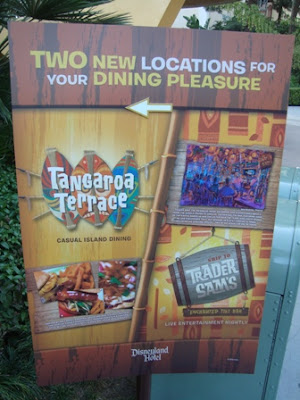 There are several things that are now open or near completion but I'll start off with Trader Sam's because I spent most of my time there and I absolutely loved it! 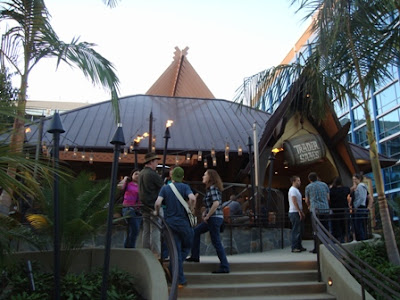 Because today was Trader Sam's grand opening the inside of the bar was at capacity when we got there but it was a gorgeous day so we took a table outside on their relaxing patio. 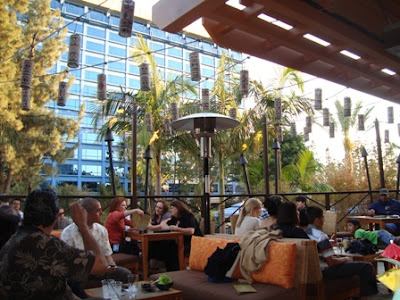 When we sat down we were greeted by our waitress who was really polite and told us a Trader Sam's joke when she handed us our menus.  Trader Sam is the trader you meet at the end of the Jungle Cruise and  the joke she told us was actually one you usually hear on the ride-  (Two of his heads for one of yours...)  I loved it!

We took a look at our menus and I was delighted to find a list of themed drinks with awesome names that were inspired by the Tiki Room and the Jungle Cruise. 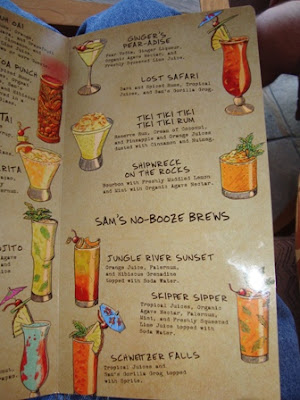 The friendly cast member who greeted us when we first got there let us know that we could take turns going into the bar if we'd like - so while we waited for our drinks we took turns checking it out.  The inside was awesome!  The room lighting would change and sounds would play when certain drinks were poured and there was so much to look at!  There was a large a collection of items decorating the bar that were inspired by the Tiki Room, Indiana Jones Adventure, and the Jungle Cruise.  Much of it was all a part of Trader Sam's collection.  I even spotted something that came from Disney World!

I loved it when I spotted Orange Bird on one of the shelves.  He used to be found outside the Tiki Room at Disney World in Florida.  The tag around his neck was in Trader Sam's handwriting and said, "I traded for this becacuse I thought it had appeal."  Get it?  Appeal = A peel...  Pretty clever! 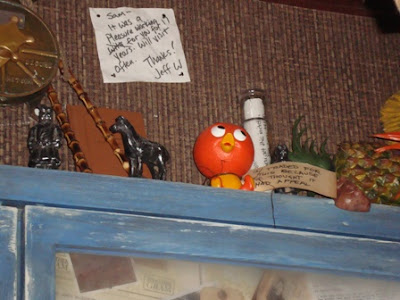 The inside of the bar was awesome and I definitely want to get a table in there sometime but the patio was actually really great too.  It was very relaxing and they had live entertainment (today it was a very enjoyable duo who sang a variety of songs from Hawaiian tunes to Elvis to Jason Mraz!) 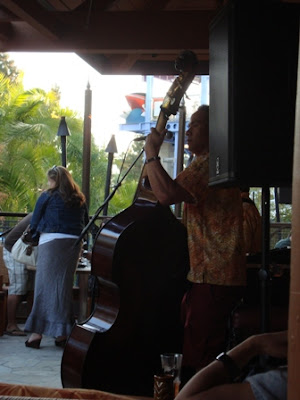 They had food on the menu but we stuck to drinks this time.  I ordered the Krakatoa Punch which was delicious and came with a souvenir Tiki mug. My friends ordered the HippopotoMai-Tai, also with a souvenir glass, and the Piranha Pool.  I tried the other two drinks as well and they were all really good!

So Trader Sam's was a pretty amazing spot!  I think I may have found my new favorite bar!

Next to Trader Sam's was the new restaurant that opened called Tangaroa Terrace.  I didn't get to dine there tonight but it's on the top of my to do list.  Here's a picture of the entrance. 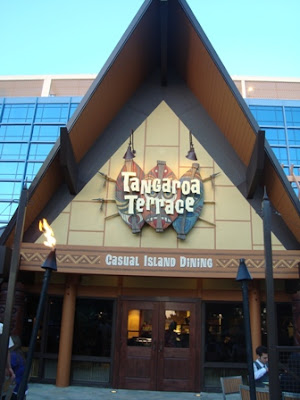 There were some more new really great things to see at the Disneyland Hotel but I'm going to separate those into two other posts!
Posted by Nerissa No comments: